Happy Friday to you, hopefully you have survived your week well and are looking forward to some fun plans tomorrow, or maybe just doing laundry and going to the market.

Well, tonights meal was something I love to order when out, but until tonight, never attempted to make it at home. And as can be seen, we had success! And you will too, you do not need to study in Asia or go off to culinary school, it’s so easy and pretty quick!

Have you ever wondered where cashew nuts come from, me too. Cashew nuts are actually the kidney-shaped seeds that adhere to the bottom of the cashew apple, the fruit of the cashew tree, which is native to the coastal areas of northeastern Brazil. The cashew apples are also harvested and sold. Those kidney shaped seeds actually contain the nut as we no it. They have a special device to crack open the shell to remove the nut, all by hand one by one. Now I know why they charge so much
for those rich delectable nuts. Now you have some trivia which will be perfect at that next mixer or awkward silence in the conversation….hmmm. 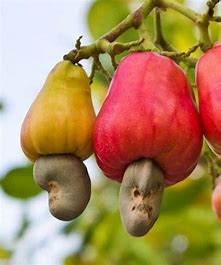 Anyway, the dish is definitely EJlicious and as always thanks for reading and I hope you have a great weekend.

In a bowl, combine the vinegar, brown sugar, oyster sauce, sesame oil, 1/4 cup of the soy sauce and 1 tablespoon of the ginger. Set aside.

Season the chicken with salt and pepper. Heat the vegetable oil in a large skillet over medium-high heat. Add the chicken and saute until cooked through, 5 to 7 minutes.

In the same skillet, stir-fry the garlic, bell peppers and remaining 2 tablespoons ginger, keeping them crisp-tender. Deglaze the skillet with the sherry and scrape up any brown bits. Add the reserved soy mixture and cook until the mixture boils, about 1 minute. Whisk together the cornstarch and remaining 1/4 cup soy in a small bowl, then stir the slurry into the skillet. Add the cashews and water chestnuts. Add 1/4 cup water to thin the sauce. Cook for another minute.